Home » Blogs » Realme 10 Pro Plus vs Redmi Note 12 Pro Plus: which new Pro+ phone offers the most?

Realme 10 Pro Plus vs Redmi Note 12 Pro Plus: which new Pro+ phone offers the most? 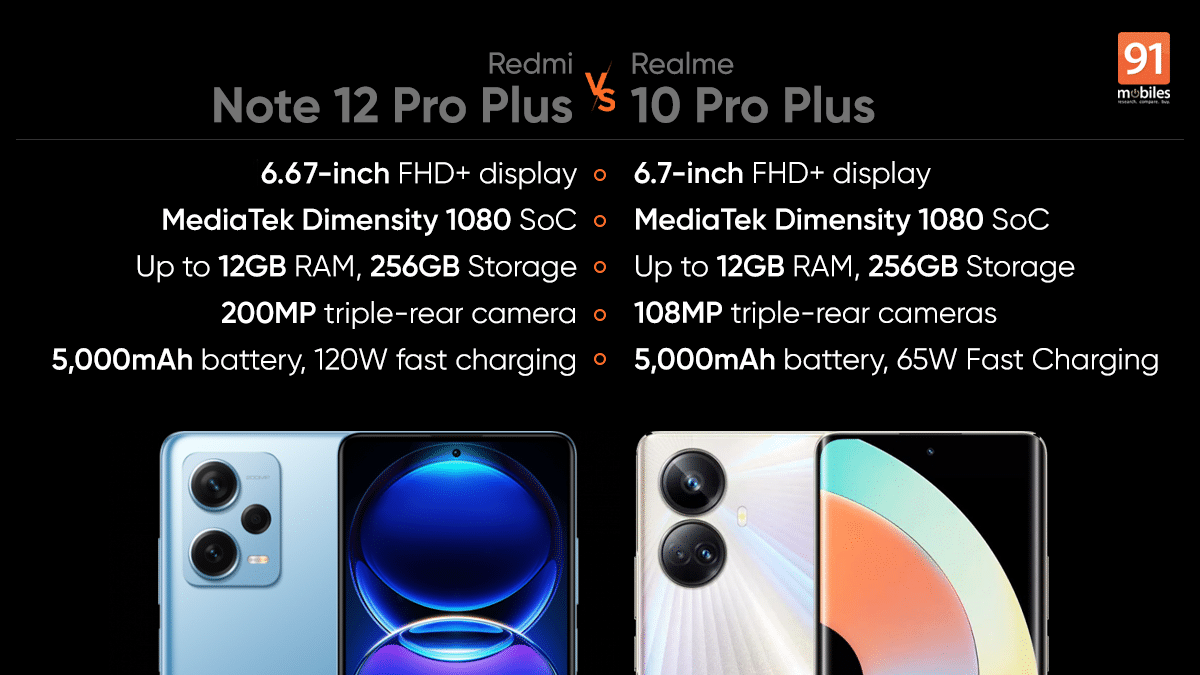 Realme 10 Pro Plus There is Launched in China on ThursdayA few weeks after the announcement by Xiaomi Redmi Note 12 Pro Plus. These are the highest-end devices in their respective lineups. This means they also offer a lot of features. The two devices currently compete against each other in China, but are expected to compete in India as well. Realme has already confirmed Realme 10 Pro Plus will be launched in India soon. Xiaomi will soon announce the India launch of Redmi Note 12 Pro Plus.

Before these two devices arrive in India, let’s see how Realme 10 Pro Plus and Redmi Note 12 Pro Plus compare on paper. Let the battle of Pro Plus phones begin!

The Realme 10 Pro Plus packs a 6.7-inch FHD+ AMOLED display. It also offers support for HDR10+ and covers 100 percent of the DCI-P3 color gamut. The phone also offers a high screen-to-body ratio of 93.65 percent.

The Redmi Note 12 Pro Plus packs a 6.67-inch FHD+ OLED display that offers a maximum refresh rate of 120Hz. It supports HDR10+ and covers 100 percent of the DCI-P3 color gamut.

Both the smartphones are powered by MediaTek Dimension 1080 SoC. It is a flagship-grade octa-core chipset based on 6nm process. It offers a maximum clock speed of 2.6GHz and houses an Arm Mali-G68 GPU.

The Realme 10 Pro Plus packs a triple-rear camera setup with a 108MP primary camera offering an F1.8 aperture lens. There is also an 8MP ultra-wide camera with a 112-degree field of view. Finally, there is a 2MP macro camera. There is a 16MP camera on the front.

The Redmi Note 10 Pro Plus also sports a triple-rear camera setup with a massive 200MP primary camera with an F1.7 aperture lens. Next up is an 8MP ultra-wide camera with a 119-degree field of view. There is also a 2MP macro camera. For selfies, you get a 16MP unit.

Both smartphones offer a reasonably large 5000mAh battery. A battery of this size should be more than enough to provide a day’s worth of power with average usage. However, where they differ is in the fast charging system on offer.

Realme 10 Pro Plus offers dual SIM with 5G support on both cards. When it comes to location services, the smartphone supports GPS, Glonass, Beidou, Galileo and QZSS. On the software front, the device comes with Realme UI 4.0 based on Android 13.

The Redmi Note 12 Pro Plus also offers dual SIM with 5G support on both SIMs. The phone supports Beidou, GPS, Galileo, GLONASS and QZSS for location services. The device comes with MIUI 13 which is based on Android 12.