ASUS is one of those companies that doesn’t hesitate to experiment with form factors and design. The ROG Flow X13 It became the first 2-in-1 Ultrabook aimed at gamers Flow Z13, a powerful Windows gaming tablet that emulates the Microsoft Surface Pro. Now we have the ZenBook 17 Fold OLED, a large Windows tablet that can fold into the middle of the screen. It also comes with a super slim Bluetooth keyboard, allowing you to use it in laptop mode or prop it up like a desktop. Sounds lovely, doesn’t it?

However, the ZenBook 17 Fold OLED is not a mass-market product, but merely a proof of concept. This raises the question, does it make sense to spend so much money on a first-generation product? Let’s find out.

My First impressionsI mentioned how the design was inspired by Lenovo ThinkPad X1 Folding. Yes, the ZenBook 17 Fold OLED is not the first foldable hybrid laptop. Lenovo has launched not one, but two iterations of the X1 Fold. Physically the ZenBook 17 Fold OLED should work. I had no issues with the hinge mechanism when folded, the discrete kickstand provides enough support to stand the tablet upright, and the keyboard itself slops well using the magnets. Thanks to its folding form factor, you have many ways to use this machine. Besides laptop mode, you can use it in desktop mode, tablet mode, reader mode and extended mode. It also comes with a folio case, which allows you to carry it safely. 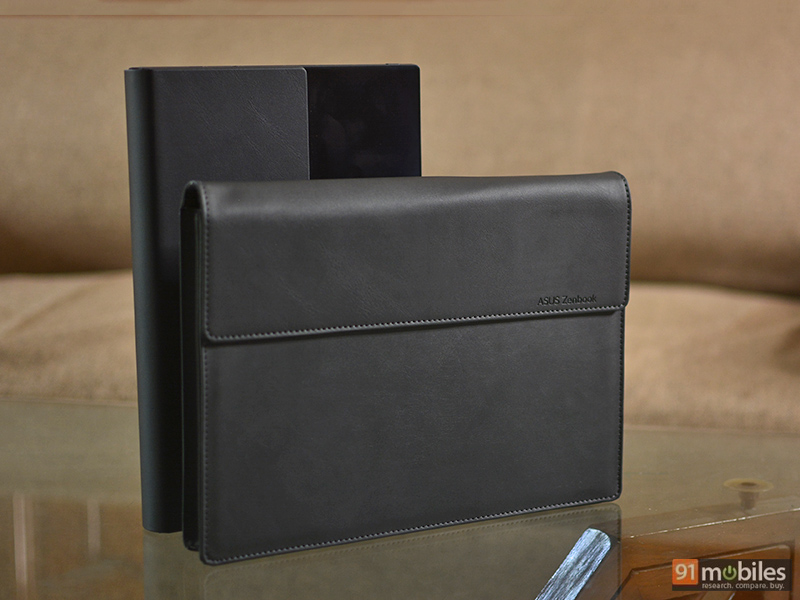 ASUS has also used premium materials like magnesium-aluminum alloy, faux leather and frosted glass that add premium aesthetic value. The device is also certified for military-grade MIL-STD 810H durability, so it can withstand shocks, extreme temperatures, vibration, moisture and more. While I’m sure it can take a few knocks, I don’t think it would survive extreme weather. Additionally, the hinge has been tested for durability and is said to last for at least 30,000 cycles. 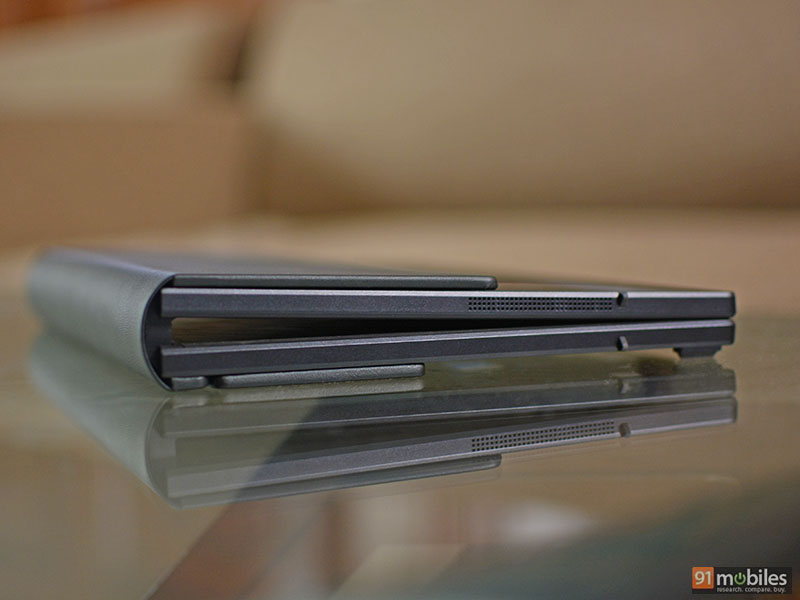 Closing it makes it quite chunky, and while I appreciate the synthetic leather for the folio-like finish, it just doesn’t feel right when compared to an ultraportable notebook. It weighs a total of 1.8kgs (300 grams for the keyboard) and is 1.25-inches thick in clamshell mode. The thickness takes some getting used to, especially in laptop mode. But it’s hard to ignore that you always have a large 17.3-inch display with you. It is definitely the most compact when compared to traditional 17-inch laptops. 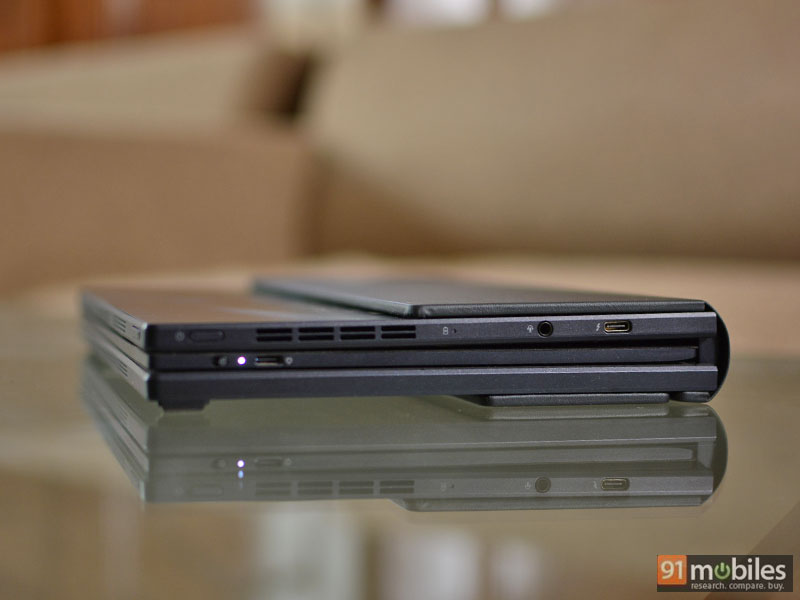 Now it’s essentially just a tablet, so I/O is very limited. You get two USB-C based Thunderbolt 4 ports and a 3.5mm combo audio jack that supports display out and power delivery. ASUS bundles a USB Type-C to Type-A adapter in the box, so that’s handy. You’ll also find some perforated sections for the power button, volume rocker, air vents at the top and the quad-speaker system, which delivers surprisingly great audio. It’s not quite as good as the iPad Pro, but it comes pretty close. 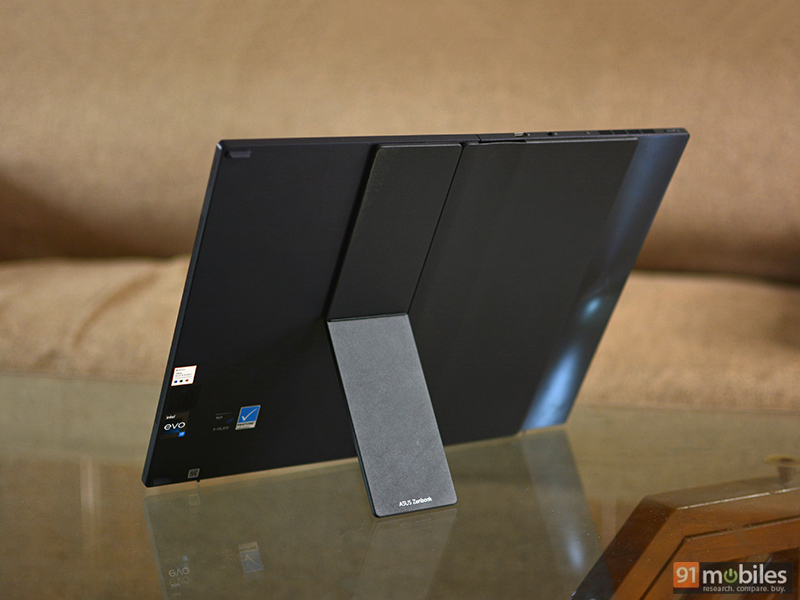 According to ASUS, the ZenBook 17 Fold OLED is not user-serviceable, so you won’t be able to access the internals. The M.2-based NVMe SSD is the only replaceable/upgradable component.

A screen showstopper and on paper, it looks great. Boasting a resolution of 2,560 x 1,920 pixels (when fully open) the panel promises to reach 500 nits of brightness for HDR content and up to 350 nits for normal use. It supports Dolby Vision, covers 100 percent of the DCI-P3 color gamut, the display has HDR True Black 500 certification, PANTONE validation and a blue light filter for eye protection. 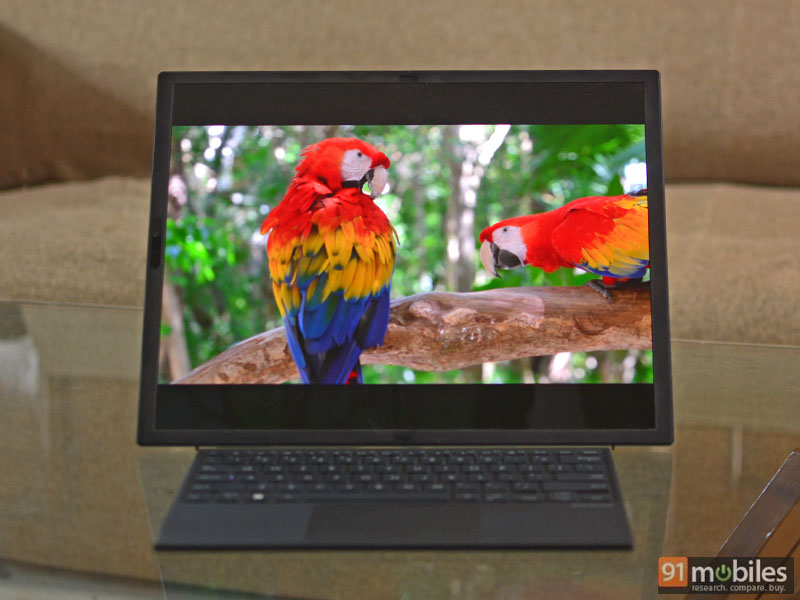 Flexible OLED or F-OLED is made by BOE and has a thin glossy plastic layer on top for protection. Annoyingly, it absorbs fingerprints, smudges and dirt easily, while being highly reflective. This means you can’t use a stylus, but it’s touch-enabled and very responsive. The bezels are noticeably thicker but can’t really be criticized as they are necessary to protect the flexible nature of the OLED panel. Since it’s a large 17-inch tablet, the bezels ensure you get a good grip and act as a platform for the Bluetooth keyboard when using the device in laptop mode. The top bezel also houses a 5-megapixel webcam that supports 1080p video and infrared for Windows Hello face recognition.

Brightness levels are good for normal indoor use, but I wasn’t really impressed when using it outdoors. Overall colors on the OLED panel are very good and contrast is also very good especially when watching Dolby Vision content. There are also tons of display optimization settings available in the MyASUS app, and I highly recommend tinkering with them. Besides changing the color profile, you can enable or disable the eye protection filter, change the white balance and more. ASUS has also taken steps to protect the OLED display from burn-in issues to increase panel lifespan. As for the crease in the middle, it’s prominent, but it doesn’t feel distracting when the display is lit.

The ZenBook 17 Fold OLED comes with an exclusive ASUS ErgoSense Bluetooth keyboard. It’s one of the thinnest Bluetooth keyboards I’ve seen at just 5.5mm thick. It comes with a built-in trackpad, a power switch and a USB-C port for charging. Key travel is good, like any laptop keyboard, and the battery is said to last about a week. The keyboard can also connect with a maximum of devices, so you can pair it with an additional device like your desktop or iPad. There are two built-in magnets that allow the keyboard to stick to the bottom of the tablet to transform it into a simple clam-shell style laptop. 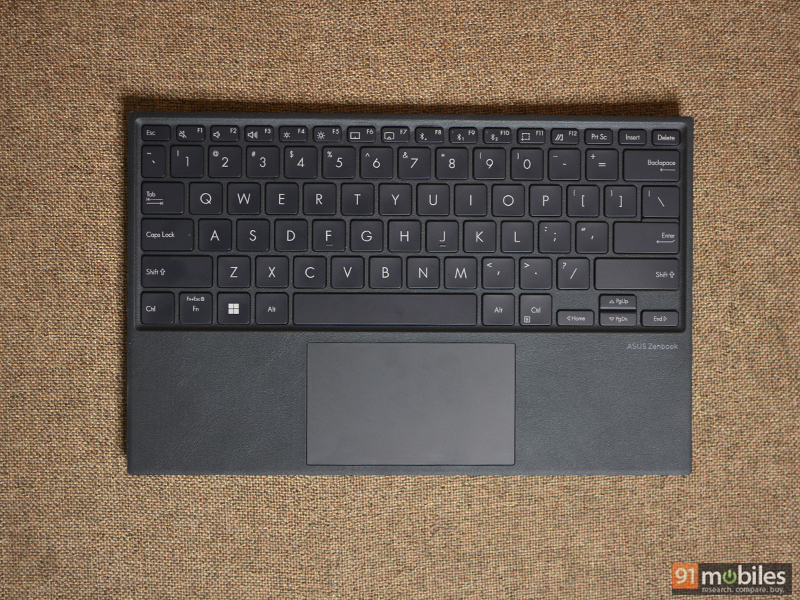 All this sounds impressive, but there are some issues that need to be addressed. First of all, the keys aren’t backlit, which makes sense given how thin the keyboard is. Generally, when using this machine at night, you have to rely on the brightness of the display. The magnets that help keep the keyboard in the bezels are not strong enough, which causes the keyboard to move when used in laptop mode. 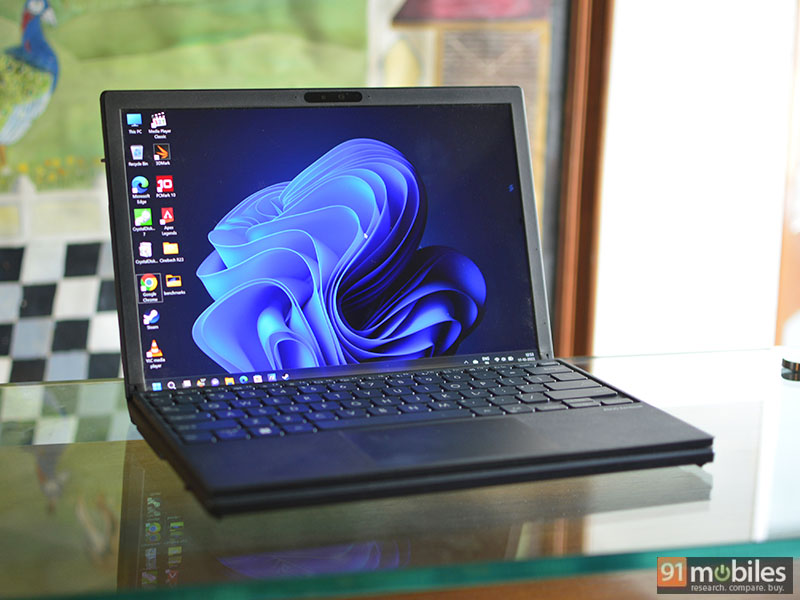 This problem is compounded by the fact that the small gap between the keyboard and the display (which is necessary) results in a mushy typing experience. Finally, the trackpad is flawed. It doesn’t register left and right clicks properly and the pointer occasionally moves around. There are also latency issues, especially when you wake the tablet from sleep. I have to say though, all these issues seem less annoying when using the keyboard on a flat desk or table.

In short, it was a great innovation, but poorly executed.

Let’s talk about the core hardware. The tablet comes with Intel’s 12th-generation Core i7-1250U processor, which has two performance cores, eight efficient cores and an Iris Xe integrated GPU. There’s 16GB of DDR5 RAM running at 5200MHz and a 1TB M.2 PCIe Gen 4 NVMe SSD. For wireless connectivity, there is Wi-Fi 6E and Bluetooth 5.0. This is the only configuration offered by ASUS in India.

The hardware provides adequate performance for day-to-day productivity and media consumption. Unlike the more powerful H-series processors, the Core i7-1250U is a lightweight chip with a 9W rated base TDP that can boost up to 29W. When I stress tested the machine with some benchmarks it was pretty much in the same spot. As for thermals, the CPU is cooled using a cold plate with dual copper pipes connected to a single cooling fan. The CPU’s core temperatures reached 96°C in my test, while average temperatures hovered around 42-45°C. In addition to daily workloads, the CPU can also handle light video and photo editing. There is no dedicated GPU, so gaming is a big no. I couldn’t get 30fps on Apex Legends, after two failed instances it just wouldn’t run. Also note that certain applications will only run full screen and glitch out if you use them in laptop mode with half screen. Some apps resized on their own, others required me to remove and re-add the bluetooth keyboard.

Running Windows 11 out of the box, there aren’t many pre-installed apps apart from MyASUS. This is the main control center where you can access various settings including power, performance, audio, display, connectivity, input devices, privacy and security. There’s also a special tool called ScreenXpert that lets you quickly stack three windows in landscape or portrait mode. It also offers additional controls like the ability to turn your camera and microphone on or off, switch between apps when using multiple displays, and more.

The battery on the ZenBook 17 Fold OLED is rated at 75WHrs and can be charged using a 65W charging brick via USB-C. The large size of the screen leads to a bit of power consumption, although I found the battery life to be above average. Using the efficient power mode and brightness reduced to 60 percent, I got six and a half hours of use while using the full 17.3-inch display. Running video on a loop in SDR can keep battery life up to about four hours. By using only the top half (12.5-inch) in laptop mode, you can get about 10 hours.

In terms of concept, the ZenBook 17 Fold OLED gets my praises. One can enjoy content on its large 17.3-inch OLED display and when you’re short on space, slap on the keyboard to turn it into a portable laptop. You can also use it as a small desktop or use the entire length of the display in extended mode. The OLED screen is gorgeous (if not class leading), it has enough horsepower for everyday tasks, and it looks and feels somewhat premium.

However, you will notice some inconsistencies only when you use the device for a few days. The glossy finish on the display feels like a sore thumb, the Bluetooth keyboard needs a complete rework, and switching between modes doesn’t feel very fluid. Then there is the price. Rs. 3,30,000, this first generation hybrid Windows machine can only do so much when it comes to core performance. In my opinion, it is not worth spending that much.

There’s no doubt that ASUS put in an honest effort, but at the end of the day, the ZenBook 17 Fold remains a proof of concept that OLED could become a mass-market product for years to come.